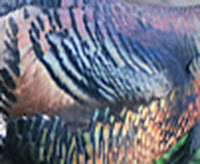 Just before dawn, light barely trickling in over the ridge, I saw on the prisondirt road, three jack rabbits hopping and circling, and doing their spring dance. There is something sweet and robust in the air that brings hidden and sleeping spirits to light and life.

Walking down the outer razor fence line, in the boulder field near the prison road are about twenty turkey hens. Displaying their spring prance on the sides and behind them are about ten gobblers.
Right in the middle of the turkey parade is buck deer with horns. The gobblers are all decked out, candy-apple read heads, dipped in powder blue, their tails brownish, red, tan and orange.
Their long feather breeds dangling from their upper chests, as the gobblers spread their tail feathers like peacocks. Like courting knights or native tribal dancers, embellishing the chase beauty and life spring brings. The hens seemingly not paying attention to any of the gobblers. They continue to peck the ground.
Suddenly all the gobblers run off down the fence line leaving the hens, necks stretched gazing over at the prison. One hen turns and strolls back up the fence line, followed by three gobblers who had chased off two other male turkeys. Just as I was about to put my pen to rest three geese families with goslings of various ages appeared behind the cell block, all healthy, vibrant and fat from the sweet grasses and weeds.
A jack rabbit late for the spring dance bolts up the fence line. My window is a natural theatre.
A red winged blackbird, fluffs out the red little feathers on it's wings and it looks like little poppy flowers, dancing and fluffing. I did not know the bird had that kind of red feathers. Surely like all other beings they are bringing in new life each in their own way. Each being including humans have their spring dance, though long forgotten due to side walks, screens and tall buildings that don't lend themselves to any aboriginal flow. I feel my heart, soul and spirit lonely for a spring hug and Earth Mother kiss.
No comments: Länkar till det här inlägget

To Watch TV or Not

Long lockdowns, and the lack of programs and activities for prisoners, have steered even the most prolific readers to watch TV. But, after hours of reading, I feel productive, like I have planted some seeds, while after hours of television, I feel wasted, as if I have no spirit or life inside, as if I have wasted time I don’t have to lose.
I must admit I like watching sports, nature, Discovery, some PBS, and not-made-in-USA shows. Also some cooking programs if I have some real food to eat myself. But even PBS has turned bland and succumbed to some Government and big-business pressure.

The shows nowadays on so called “free TV” are 99 percent garbage, especially network shows, news, and talk show programs. Reality shows with no reality. The programs worth watching — like Discovery, Animal Planet, National Geographic, Nova, art and live sports — have all been moved to cable or satellite, and are hidden from our view. We are left with the dumbest dumbed down reality shows and the most unrealistic cop shows that indoctrinate their audiences with false justice and false rights of criminals in some magical land where poor people receive good and real lawyers and all the judges and law enforcement officials are angels, heroes, and good people, people who have never spat on the sidewalk and are only down here from heaven to make sure poor people and people of color get justice.
All the stuff you see in law enforcement shows is only true for TV. More often than not, people of color and the poor are not getting good lawyers or real justice. No judge or prosecutors care about an accused receiving healthy court representation. That’s a myth, as is the one about justice being color-blind in the USA which has always been a myth.

TV was not allowed into prisons in California until the late 1970s when the Department of Corrections figured out that TV could dumb down and pacify the masses of prisoners through lifeless, vicarious living. Even the prison videos they show are mainly violent with no redeeming value.

I remember when I came to prison in the late ‘70s that TV still had not become like crazy glue. TV was still not yet paramount in prisoners’ lives; had not totally paralyzed and chilled the minds, hearts, and soul; and had not turned off our ability to learn, grow, and come together to promote deeper and higher education, positive change, and civil and human rights.

Now the first thing one does in the morning is turn on the TV, like a drink of water. I don’t think TV can be a learning tool because it lulls and forces the mind and imagination to sleep and makes the creative spirit lazy.

Knowledge, heart, wisdom, and change used to bounce off, through and beyond these walls, when prison was a positive change university recognized around the world for imparting positive consciousness-raising and awareness that lifted prisoners’ spirits and hope and which acted as a catalyst for positive social change regarding human rights and the rights of the poor. When I turn the TV off, time flows better and minutes and hours become enriched and enlightened. This morning, before I knew it, I had read seventy pages of a new book. Suddenly, it was dinner time and my mind, heart, and spirit were busy pondering ideas beyond prisons of any kind.

Too Cruel, Not Unusual Enough

Spoon had an essay and some poems in a very important forthcoming anthology about Life Without the Possibility of Parole, Too Cruel, Not Unusual Enough. You can read more about the project and contribute to the campaign to get this book out to California legislators and policy makers by going here: http://www.igg.me/at/todpp.com

Read the third part about the new gosling on the Bird Blog!


Day 17
Another guard approached me today, and told me the geese family waited patiently at the gate of the rotunda to return to the small yard. The geese family know they are special here on this yard. Unfortunately though an ignorant yard worker decided he wanted to hold the gosling, so he chased it around the small yard and sought to separate it from its parents. Parents that screamed in horror with their beaks open. The gosling's security and peace, my little buddy's freedom to grow was shattered. The yard worker bird hater finally stopped harassing the bird.
At the end of my day I sat on the milk-crate outside the art room playing my flute. The geese were not in sight, but when I looked to the side and opened my eyes, I saw my little buddy and its parents, some black birds, cowbirds and a couple of seagulls and pigeons listening to me play. My day was made.

Read it all here...
No comments: Länkar till det här inlägget