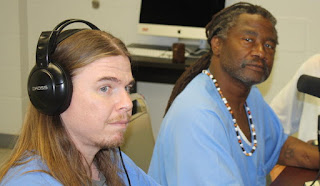 Listen to Uncuffed! A radio series that started September 2018 with interviews produced by men inside Solano State Prison, aired on KALW.com radio and as podcasts.
The producers come from all walks of life. They are poets, musicians, actors, and writers who share a passion for revealing the human side of incarceration.
Uncuffed is supported by Arts in Corrections, a program of the California Arts Council with funding from CDCR.
Listen to all the stories on Uncuffed.


Trailer for the documentary "Barstow" by Rainer Komers. Spoon is reading excerpts of his book "By Heart"

Trailer for the documentary "Spoon" by Michka Saäl

Documentary of the production at San Quentin 1988

Spoon reading his poem At Night I Fly


Official Trailer for the doumentary At Night I Fly


Trailer for the book By Heart


Spoon reading from By Heart


In an interview 2013 on the German radio station Deutsche Welle, Kate Laycock talks with Spoon about "how a prisoner serving life without parole became a published poet, took part in a wide range of international artistic collaborations, and found a way to 'go on', even when going on seemed impossible". This program is broadcasted worldwide.

Interview in six parts with Spoon 2009 on Swedish National Radio in the program "Verkligheten" (forward to the last ten minutes of each program).