Spoon now has a pro bono legal team! They are working on a new application for commutation that will be sent to Governor Newsom in fall this year.

Do you want to send a letter in support of his commutation?
Explain how you know him and why you believe he deserves a commutation. It should be as detailed as possible, down to earth and not longer than one page. It's necessary to use his given name + CDC number:  Stanley Jackson B92377.
You can find guidelines on the web about what to include in a support letter of this kind. Here's an example:
https://legalbeagle.com/8145851-write-letter-clemency.html

Send the letter to Spoon:

2018
Spoon has been in prison 41 years. The Governor of California started to grant commutation to Life Without Parole prisoners last year. Spoon is still waiting for his turn. It's Governor Brown's last term. Help telling him Spoon should be granted a second chance by signing this petition:

The petition was sent to the Governor in November 2018. Spoon was not granted a commutation by Governor Brown, but we will continue, there must be a way!  Please sign until Spoon is free! 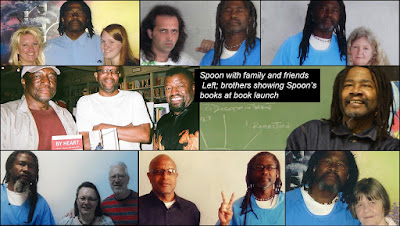 2016
After 38 years in prison Spoon Jackson has filed a Habeas Corpus petition to the courts to have ”Special Circumstances” removed from his Life Without the Possibility of Parole (LWOP) sentence. A Habeas Corpus gives a court the option to strike Special Circumstances from a sentence in the interest of justice based on a prisoner's age, in custody behaviour and good programming. If granted, it would change Spoon’s sentence from Life Without Parole to Life With Parole and this could lead to his release from prison! 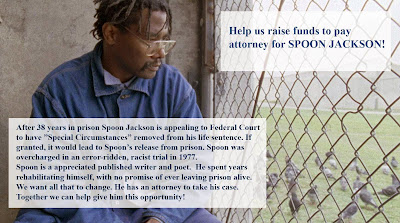 Spoon was overcharged in an error-ridden, racist trial in 1977. There was no evidence of the special circumstances he was charged with. Those charges were fabricated and added to the case by the court. Without them Spoon could not have been given a LWOP sentence. But there is no way to appeal such a sentence - only in custody behaviour.

The (Habeas Corpus) petitions have been denied in California State Courts. Spoon now has an attorney who has appealed to Federal Court.

Funds raised with the help of SJRA Sentencing and Justice Reform Advocacy.

2014
Spoon sent a petition for commutation to the California Governor Jerry Brown.
It was not granted by the end of Brown's term.