Nowhere But Barstow And Prison

Despite the fact that Judith is a small, Jewish, white woman, and I am a sturdy black man over six feet tall and a decade younger than she is, some people may think: Oh Judith must be another one of those goody two-shoes liberal white women rescuing an ignorant black man from sinking further into the abyss of San Quentin. In fact, though, we both understood that human beings must rescue themselves. Still we can be there for each other and believe in each other, as Judith believed in me and I believed in her. Because we shared our two different lives and backgrounds – putting ourselves out there, heart first – we enriched each other and forged a friendship based on realness, respect, art, trust, uncommon and common ground, and love. My weakness may have been her strengths and my strengths her weaknesses. Like wolves that know they are howling at the moon in common, Judith and I have always known that we have humanity in common. This truth led me to my undiscovered self, to a heart of bonding with Judith, to finding that I am a writer and to the realness that can mend or heal all things wrong or wounded.
Ani DiFranco composed music to a poem by Spoon with the same name as this essay. 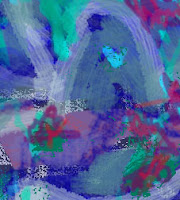 I imagine I’m the last person that should be speaking on politics in America. Because when I came of voting age I was already in prison.


I long to be part of other countries like Sweden, Norway, Canada or France. Yet I have loved ones and family in USA that believe in this country. If the Republicans are elected I hope folks will heed Ani Di Franco’s tour to paint the Congress blue.
1 comment: Länkar till det här inlägget

LWOP and the BOARD

When I came to prison in 1978, ten days into 20 years old, a naïve kid from the heart of the high deseret, I wanted to pay for the wrong I had done. I was given Life Without the Possibility of Parole. I thought that could not mean forever and there must be a route to a second chance.  My paperwork said I would go to the Board after 12 years, so that would be 1990, beause my time actually started in 1977.  In the meantime, I started to grow up and know myself and evolve into a full human being with an understanding that all life mattered.  I was on my selfrehabilitation journey.  The year 1990 came around and I went to the Board and the Deputy Commissioner of the Board said the proceedings will be run like a regular board hearing. He complimented me on my art work and in particular, my writing accomplishments. He said the reason he is not recommending me for parole, pardon or clemency was because I did not have enough time in yet. He also said I should write my way out of prison. He said I would be summoned back to the Board oin 1993.   The Board never called me and supposedly repealed that LWOP Board law taking effect in 1994.  By my not being summoned back to the Board as contracted and by law, is a continuing violation of the 6th, 8th and 14th amendments to the U.S. Constitution and Ex Post Facto laws.  My crime happened  in September, 1977, commencing July 1, 1977. During 1981-1982, all life prisoners were entitled to annual hearings. Watson,866F.2d@1094;p.c.§3041.5(b)(2). It should be duly noted that on July 1, 1977, the state legislature enacted the California Determinate Sentence Law (“DSL”). Under this enactment, prisoners serving Life Without Possibility of Parole (LWOP) were statutorily entitled t o p a r o l e c o n s i d e r a t i o n . C h a t m a n , 7 5 4 F 2 d 1 5 3 1 33,p.c.§2100etseq.,2245-2292,2300.  I am a LWOP, and likewise, I am entitled (866F.2d1093,9thcir.1989). I therefore have a state created vested liberty interest same ascertains. Stanworth@786-787;p.c.§3041(a).    CDCR continues to ascertain that parole law was  repealed in 1994. There was no legislative action to repeal that law. Furthermore, it should be noted that in accordance to clearly established state and federal laws appertaining to this matter, notwithstanding the 1993 repealer Title15ccr§2817et.seq.,register93,no.52 or the revisions to BPT [BPH] rule2817,operative date January 19, 1994, eliminating the requirement of the Board to schedule and conduct LWOP reviews, I still have “a vested state created liberty interest” which entitles me to parole considerations. In re Stanworth, 187 Cal.Rptr. 783, 786-787 (1982); per C§3041 (a); Weaver v Graham, 450 US 24 (1981).  My crime was committed in 1977, therefore under California Determinate Sentencing law (DSL). Under this enactment, prisoners serving LWOP were statutorily entitled to parole consideration. Chatman v Marquez, 754 F. 2d 1531-33 (9th Cir. 1985).  To reduce prison population, sensible parole for prisoners who have been incarcerated for decades should be considered. Continuing violation of a prisoner’s 6th, 8th, and 14th amendments, U.S. Constitution and Ex Post Facto is not justice, but is injustice.

First published in the SJRA Advocate
No comments: Länkar till det här inlägget