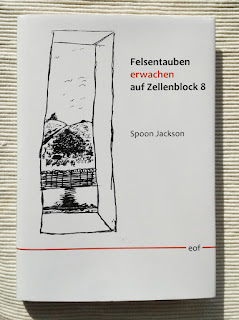 For the first time Spoon has poems translated in another language.


"Felsentauben erwachen auf Zellenblock 8" are poems translated to German by Rainer Komers and edited by Jürgen Brôcan. Both are active in "Edition Offenes Feld", a group of writers and filmmakers. The book was published June 1st 2017.

The publisher BoD announces the book:
"Spoon Jackson's poems are, as his translator Rainer Komers writes, 'stiffs' *, written in lines, personally and directly,” they are straightforward messages from a reality that feels like raw meat. Jackson's poems are not focused on the prison life, but on the individual who has to live his life there, without any prospect of pardon, but always striving to preserve human dignity. Through the observation of nature and the memory of his youth, Spoon Jackson keeps his chin up and gives the reader irrevocable hope."
------
*"a stiff", or "kassiber" in German, is a secret message smuggled out of a prison by a (political) prisoner. The word has a Hebrew origin.

You can order the book at:
BoD.de
and
amazon.de